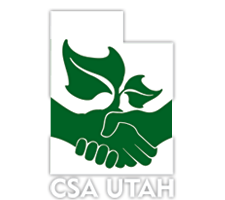 Rooted in Your Community, Harvested for Your Table

What is a CSA?

Sign up for the latest news and events about CSA's in Utah.

How Does a CSA Work?

Food is a basic human need. Yet for most of us in the U.S., it is merely an inexpensive commodity that we take for granted. Questions such as how, where, or by whom it is grown are not generally the topic of conversation around the dinner table. Considering the current situation in agriculture, perhaps they should be. Food in the U.S. travels an average of 1,300 miles from farm to supermarket. Almost every state in the U.S. buys 85% of its food from some place else. In Massachusetts, for example, this food import imbalance translates to a $4 billion leak in the state economy on an annual basis. UMass studies have determined that Massachusetts could produce closer to 35% of its food supply. This 20% increase would contribute $1 billion annually to the economy of the Commonwealth.

Increased local food production would add a significant number of additional food dollars to the economy of many other states. Yet the nation's best farm land is being lost to commercial and residential development at an accelerating rate. At the same time, the retirement of older farmers, increasing land and production costs, low food prices, competing land uses, the lack of incentive for young people to enter farming, and the fundamental restructuring of the national and global economy all combine to make farming and local food production in the U.S. an increasingly difficult task. Community Supported Agriculture represents a viable alternative to the prevailing situation and the long-distance relationship most of us have with the food we eat.

Source: The University of Massachusetts Extension